As I continued training this week in preparation for the 2011 Carp Slam (details of which will be contained in a later passage) I stumbled upon someone interfering with my training. It appears as though some of the northern beats have already been scouted by our friends yielding bow and arrow. I would ask that if you are one of those people reading this you cease and desist immediately based upon the following observations.

Don’t get me wrong, I don’t have a problem with hunters in general, hell I’ve gone hunting several times. I just don’t quite understand killing a fish for no reason, even if it is a (grass) Carp. Maybe I’m totally off base on this one, but I know one thing, my boy Roughfisher most likely has my back on this one. 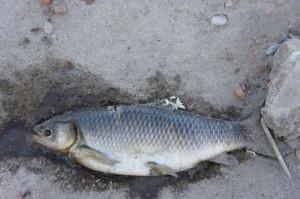