This fine morning the air was brisk, the skies cleared, and we were on the water yet again. David was eagerly throwing streamers in the early daylight hours, but after early refusals he was left to explore other options. 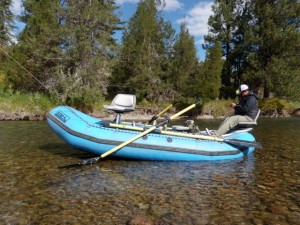 We pulled the boat to shore as David searched through his box for the perfect fly. A fly that would present itself effortlessly in the rift of the current, encouraging another beautiful trout to partake in its glory.

David chose a classic for this particular stretch, the girdle bug. This pattern imitates the stonefly as it makes a suicidal journey, bouncing along the river bottom. Trout often sit below small rapids gorging themselves on these innocent stoneflies who have been knocked loose from their rock homes. David secretly concocted a plan to fool one of these elusive game species with this deadly stonefly nymph.

As we rounded the bend David let fly a beautiful roll cast that landed 15 feet from the stern of the boat. The nymphs floated as close to a natural insect as I have ever seen. I lost sight of them as they neared the bottom, but even then I was sure David was destined for glory.

His indicator plunged and with a hook-set that even Roland Martin would envy David was on the business end of an epic battle. The fish gave him violent head-shakes and rolled in and out of the current as he continued to hold strong, giving line when needed but always in control of the fight. At first he was positive it was another whitefish, but from the apparent size David confirmed that this must be a trout, and a fine one indeed. As the battle drew to a close and I netted the fish, a great flood of laughter and tears came from the rest of the boat. David was elated, he held his catch like a proud father and urged us to admire his greatness. He gloated at the size of his “carp” and asked aloud how many others might be lurking in Montana’s waterways. We assured him it was a rarity and that only the finest of anglers could present a fly perfect enough to fool them. As he released his catch those of us in the boat took an oath to not let him know the error in his judgement. David had caught and landed the most sought after sport fish in North America, the Longnose Sucker.