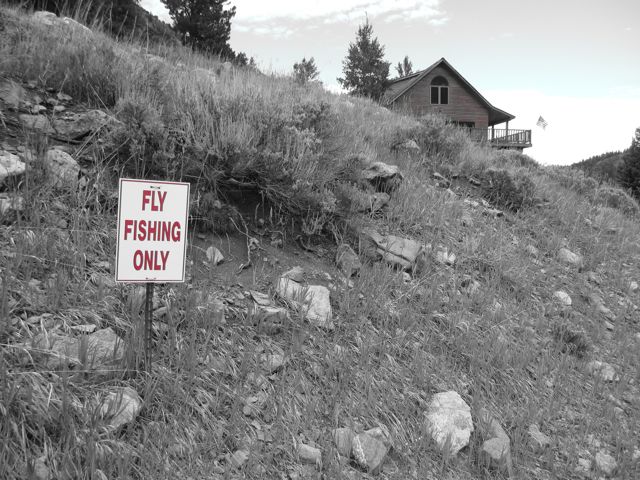 There have been several evenings that I have overheard men of distinction wearing expensive suits and smoking fine cigars, mention hidden streams and lakes where fish have grown to enormous size. These special habitats are not within the public domain and often times these men of distinction would try to impress one another with their stories of grandeur. Before long photo albums (or iPhones now) were pulled from their sheathes as these old rich guys brought out the real fire power. Obese trout being held awkwardly with shit eating grins and happy guides were seen over and over again. Their bellies would stretch over their pants and large sighs were heard as they showed picture after picture to their envious friends.

The photos usually sickened me, what was of interest however was how to get into these places, either legally or not. My first attempt was obviously of the illegal variety. Sneaking in under the cover of night I spent several hours fishing one of the most exclusive and expensive Colorado fishing reserves, with fantastic success. While I got my first taste of fly-fishing aristocracy, having to hide in the bushes as the night patrols roll by isn’t exactly relaxing. My journey continued as I looked for a more legal avenue to get into one of these awesome creations.

This weekend my opportunity presented itself. Nestled in the shadow of a 14,000 foot peak a private set of lakes, accessible only by a dozen or so homeowners was an opportunity I would not pass up. The lakes were small enough in size so that one might be able to cast to the middle from all shores and cover the entire lake without a boat. 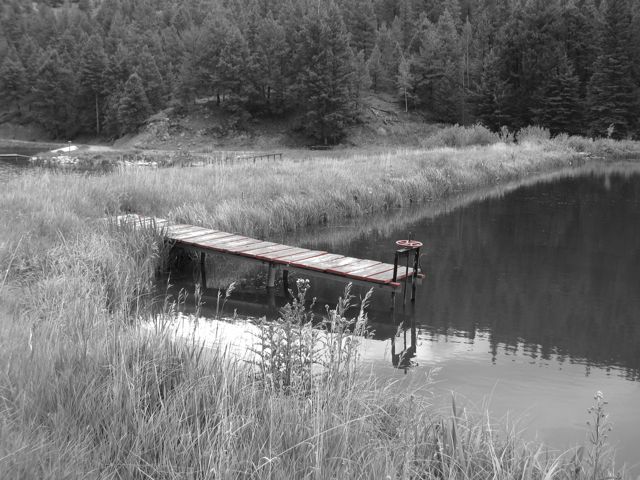 They were also fairly deep in the middle, some approaching 20 feet so that the fish were able to survive the winter. The lakes were connected by a series of small streams that dumped into the next lake in the chain. The entire chain comprised some 7 small ponds that were home to a variety of rainbow, brown, and brook trout populations. Because they were all connected each lake had its own unique attributes. The lower lakes reached higher temperatures which produce different hatches than the upper lakes which are essentially alpine lakes. Regardless however, it wouldn’t be fishing without fish, and I went on the offensive trying to beat as many of them into submission as I could.

Find them I did and boy were they big. Each pond had approximately 20 brown trout in the 5-7 pound range and just as many rainbows in the heavyweight class (according to the caretaker). These bruisers had their choice of hors d’oeuvres every evening as countless smaller fish came crashing to the surface chasing damsel flies, mayflies, and caddis. While the smaller fish took the opportunity for easy meals, they did so at the cost of death. The larger fish had become almost completely carnivorous, devouring smaller fish in an instant, with the only evidence being a ring on the waters surface.

I took this opportunity to see if these fish had seen 4” long articulated sex dungeons, circus peanuts, boogie men, and about half a dozen of my own creations that look awful but have big hooks. After 60 foot double hauls with 4 ounce streamers I was rewarded by seeing fish chase my offerings from the depths. Often times the wake of water racing towards the shore was accompanied by a shudder that shook my rod straight to its Korean foundation. Once hooked these fish were furious. Taking you on runs that tested your drag, and into sub-surface structure that tested your luck. .

As with most things my experience ended before I thought it had begun. While it was a managed environment and many will say its not real fishing I will say this. The private management is no different than public management of fisheries, except that it is done more efficiently. Every lake in Colorado that people launch their 15′ Alumnacraft’s on has thousands of stocked fish every year. Many of these fish do not survive or worse yet, carry pathogens that infect the general population. There truly is no substitute for responsible fishery management in a modern world, especially one where the demand far outpaces the supply. It pains me to say that but it is true, just take a single look at any tailwater and you can deduce the importance of fisheries management.

When leaving I couldn’t help but envy those who can wake up and check the conditions on their deck over a cup of coffee. Those lucky enough to carve a piece of paradise for themselves should wake up everyday and feel fortunate. May the God(s) of fishing and/or life see it fit to bless me with these luxuries before I die.