My friend Justin has been working a lot of long hours at his job. As a thank you, his company offered to put him and four friends up at the Harmel Ranch on the Taylor River.

He called me and asked if I wanted to go, which I did, “as long as it was free.” Free it was, and they were even kind enough to include breakfast one of the days. We planned the trip for a Tuesday/Wednesday which meant that I had to drive from Denver to the ranch, early enough in the morning to get a full day of fishing in on Tuesday so I could really get my monies worth. A 4am departure was mandatory and for Justin, this meant camping across the street from the ranch so he could wake up at his leisure.

Ok, so I’ve never really done one of this “pay to fish” places and wasn’t sure what to expect, neither was anyone else for that matter. I pulled up to the place and walked in where I was greeted by no less than four people who were more courteous than I have ever been on a first date. The guy in the fly shop told me about the “hot” patterns (and when the stocking truck showed up…) and gave me a map of their private water. Our cabin was nothing special, but it had 2 beds, a cot, and enough floor space for two other people. The ranch water was about 1 mile of rehabed stream with typical weir/pool, weir/pool configuration.

The fishing was ridiculous. We pretty much had our pick of the holes and casually got around to catching a few fish when Justin finally got moving around 10:30 on Tuesday. We were told the stocking truck was showing up in the afternoon and like clockwork it pulled up and according to the employees dropped off 1,000 fish as it does every month.

The guys on the ranch kicked the fish around a bit to get them moving and told us to get after it… I took the opportunity and did just that. Obviously these fish weren’t too specific but I did find that they had an affinity for small baetis stuff and in particular brassies. I understand now why some people just pay to do this. I’ve never had fishing that was so easy. If you didn’t get one to eat on your drift you usually inadvertently false hooked one as you were picking up to cast. There were pools where fish were literally crawling on top of one another clamoring for whatever food was in the water. The only thing to compare it to is video I have seen of salmon runs in Bristol Bay. 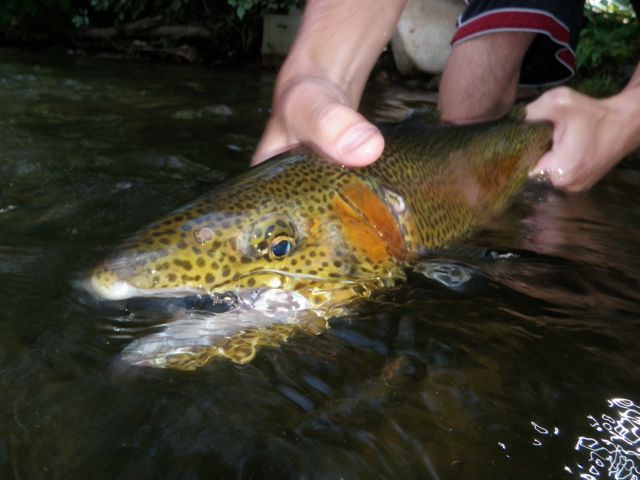 I couldn’t help but notice all of the people driving by on their way to the C&R glare at us crossing the street on our way to the pet fish farm. It was a look I had given hundreds of people on my drive up to the “real” fishing. Regardless of being judged by passerby’s we all continued to take full advantage of the feeding frenzy that never seemed to stop.

As the evening drew to a close we were told by the staff that a full Thanksgiving style buffet was being served for dinner, but Justin’s comp pass didn’t cover the meal and it was $24.99/person. We elected to eat mac n’ cheese and brats instead. After polishing off the better part of two 30 racks we staggered to bed for more ridiculousness the next day. Turns out hatchery fish are hungry their first few days in the wild as the fish continued to pound most of what they saw in front of them. We didn’t see any bruisers that people rave about on the C&R but nonetheless these fish were pretty big and had the square faces to prove the life of luxury they had lived in just days before. 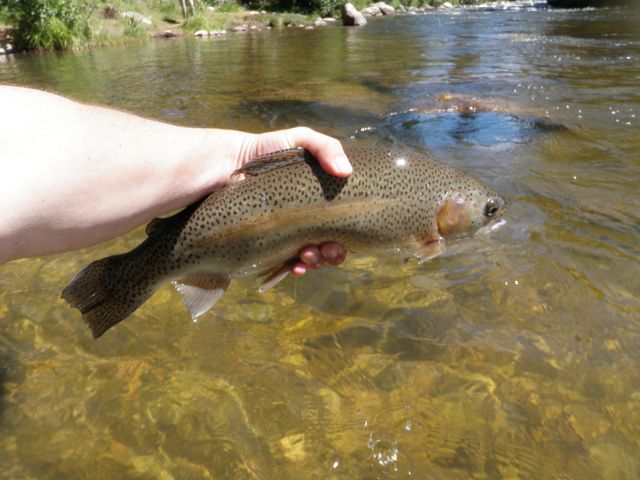 The second day was just a continuation of the day before and by two o’clock we thought we had enough and started packing it in. Was it worth the four hour drive? Yeah, it was, mainly because it was free. If you don’t get out much and you want to catch a ton of fish this is probably one of the easiest ways to get a few that are photo worthy. Drift, fly selection, and overall skill are not prerequisites like they are on most streams which means that if you’re not catching fish here, you’re probably not going to catch them anywhere. A short video on how stocking works at the Harmel Ranch.