Oh wow has this fall been an utter disappointment compared to years past. Apparently mother nature forgot to flip the switch for fall so we’ve pretty much gone from late summer to early winter in about 2 weeks. There are still green leaves on the trees. Taking advantage of this situation I have used my girlfriend’s cable package to track my fantasy football team as well as get ready for some serious midge fishing. 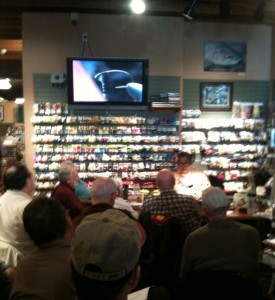 If you don’t like the NFL first of all we will never be friends, and secondly, look into taking advantage of some free things that the shops are doing instead. I went and saw Rick Takahashi at Charlie’s Fly Box this weekend. Rick was co-author of my favorite fishing publication of 2009, “Modern Midges” and as you can see from my brilliant photography, it was a well attended event. In addition to free coffee and donuts I also met Herman DeGala who has invented some of the deadliest patterns in this universe. You probably should look at his website and try some of these out, while they look like works of art, I assure you they are easy ties and they catch lots of fish. In the coming months I will be waiting for the snow to fall and my car lubricants to freeze while I tie some midges and other garbage for the Taylor. As for now, I am overly optimistic on the Juju midge, an MVP candidate from the 2007 season. I’m expecting it to make a big comeback for me this year. Now back to watching Brandon Lloyd torch the NFL (I can’t believe I’m saying that) and thread midges. 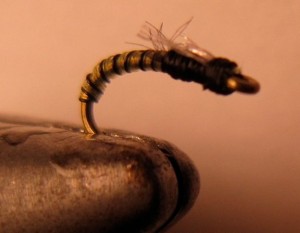