This summer for whatever reason the flows below GMR have not been to my liking. As much as it pains me to say this, my first float down this section was in September. Pathetic.

The only reason I got to go was because Chad Bowers called me up and said they needed another man who can man the oars. Trust me, if you can teach yourself to row, you will see more opportunities come your way than you ever thought possible. It is truly amazing how many people cannot pilot a raft down a river.

The day we decided to go was the coldest day of the week, as evidenced by the temperature at our 10:30am put in being only 55 degrees. The wind was ferocious, it was seriously blowing us upstream in several sections. This is not an exaggeration, there were five minute spans of us not moving anywhere as gusts of what seemed to be 40 miles an hour pretty much took our boat wherever it wanted. The fishing through the canyon was less than spectacular with a few fish being picked up, most of which were not photo-worthy. 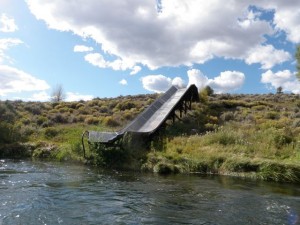 If you haven’t heard of Uncle Paulie you are missing out. His ranch is pretty much the most incredible thing you will ever seen in your life. If I remember right, I believe the guy made somewhere in the ballpark of $750 million…in 2006. Needless to say this commodities trader, turned retired billionaire has invested an unfathomable sum into his fishing reserve. With the Sheriff, county, and Army Corp of Engineers in his back pocket he has been able to put in massive stream improvements without permission (the Corp of Engineers say they “don’t exist”) and stock the river with some sort of weird hybrid steelhead/rainbow/super-fish cross. Going over his weirs it is not uncommon to see 1,000 lbs of rainbow sitting below each one, most of which tip the scales close to 10lbs. He has manicured basketball, tennis, and volleyball courts. His guest house looks like a 4 Seasons and I’m sure there are a plethora of other amenities that you can’t even see.

After missing several good fish Chad finally was the one to bring in a respectable rainbow so that we could all go home feeling just a little bit better about ourselves. 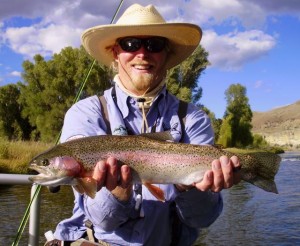 As is becoming the “norm” on this section we ran across several other boats, which brought the grand total to over a dozen fisherman for this stretch on a weekday. For many years this was one of the best kept secrets in Colorado. Recently however, it has become increasingly more popular, and having to wait in line to launch your boat is not uncommon. The fishing on this section has definitely slowed as time has progressed but the big fish are still in there, you just have to work harder for them. I hope that I can squeeze one more float in this year to see if I can get a few real nice ones to help fill up my iPhoto library. Just in case you were wondering, this is what we are considering “nice” to be. 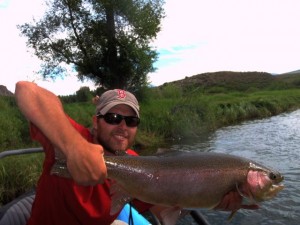