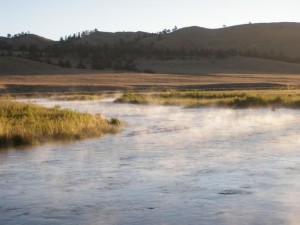 At 6:30 AM I pulled into the parking lot with Surniak already waiting outside of his car. The temperature was 32 degrees, fall comes quickly in this part of the world. We were alone in the upper lot, something that is not only unusual, but unheard of on a holiday weekend. We took the opportunity to scurry down to the water. Surniak doesn’t have wading boots because his have shrunk and fallen apart and I just don’t have waders right now so we looked very professional on this fine morning.

Fish have moved into the system but only sparingly and those that have arrived are interspersed amongst the usual places. The moss and algae growth has not had a chance to die off and thus makes it nearly impossible to see anything. This also means that the gravel bottom that is imperative for these fish to have sex is not present. Several strands of underwater foliage are starting to turn brown and within a few weeks rest assured they will all be dead and washed into Elevenmile reservoir. 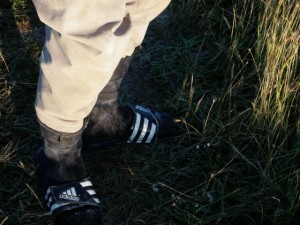 The flows say 150 but it looks more like 200 in most places to me. The water temperature is hovering just under 60 degrees and the nights are now obviously getting below freezing. Cooling temperatures will help kill off the foliage and allow the start of one of nature’s greatest races. Pick your days off. I’ve alredy got mine penciled in, maybe I’ll see you up there.