A few notes that I’ve kept over the years…

The Aspinall Unit is the group that sets flow targets for the Gunnison Gorge throughout the year, they have meetings twice a year discussing the hydrology of the region as well as the operations anticipated in the future. The gauging station that is relevant for this stretch is the Gunnison River below Gunnison Tunnel.

The Chukar Trail requires a 4 wheel drive vehicle, with significant ground clearance. I’ve seen Subaru’s do it, but that may be not possible from year to year. The road is rarely if ever maintained and rains make it so slick that it is considered impassable. This is a legitimate warning, not a benign statement to be ignored.

The shuttle from Pleasure Park is well worth the $85, and the first shuttle leaves at 0530 which puts you at the trailhead at roughly 0715 after you pay, drive there etc. I’ve stayed in Delta, Paonia and at Pleasure Park. Getting a cabin at Pleasure Park is the easiest way to spend the night before you leave.

If you have extra money or enough people to justify it Larry Franks has a mule service that will haul your gear down (970-323-0115). This service is $125/animal with a 5 animal minimum. Keep in mind that Larry won’t be there at 0715 but it ensures that you only make one trip down the hill. You can still get there early or camp at the trailhead allowing someone to head down early to reserve a campsite, more on this below.

The trail is not physically demanding, but rather has some areas that are moderately steep and uneven. There are some stairs cut into the trail in these areas to make walking easier. In order to get a boat down by yourself I highly recommend getting a frame pack to strap your boat to. In addition to the frame pack, if you can use a vacuum to pull all the air out of your raft at home and roll it you will reduce the size significantly. While the “group carry” seems like a good idea I’ve found this to be more difficult than each person carrying their own allotment of gear. Be prepared to make two trips if necessary, it’s much faster and easier on your body than a single heavy awkward trip.

At this point it is advisable to pay your fees at the top of the Chukar Trail and head down to the river in order to reserve your campsite. Keep in mind that you can only reserve campsites the day you launch, starting at midnight. During the busy month of June and the salmonfly hatch you may want to get down there closer to midnight than you would in August. There is a toilet at the put in as well as free river corridor maps, and historically there has always been 6″ barrel pumps to inflate your boats.

*A reminder about requirements. 3 oars, an extra PFD, groover, and no open fires or burning of wood. Rangers do check people down there on occasion, not all the time, but more often than you would think.

This part requires its own heading as it is the part that people are most concerned with. For starters here is what the sign in sheet looks like, be sure to observe the people above you on the list and see where they are camping both nights, don’t overlook people doing 2-3 day trips down there. There is a 2 night maximum stay in the Gunnison Gorge so there are a lot of groups that do a 3 day 2 night type of trip up there. 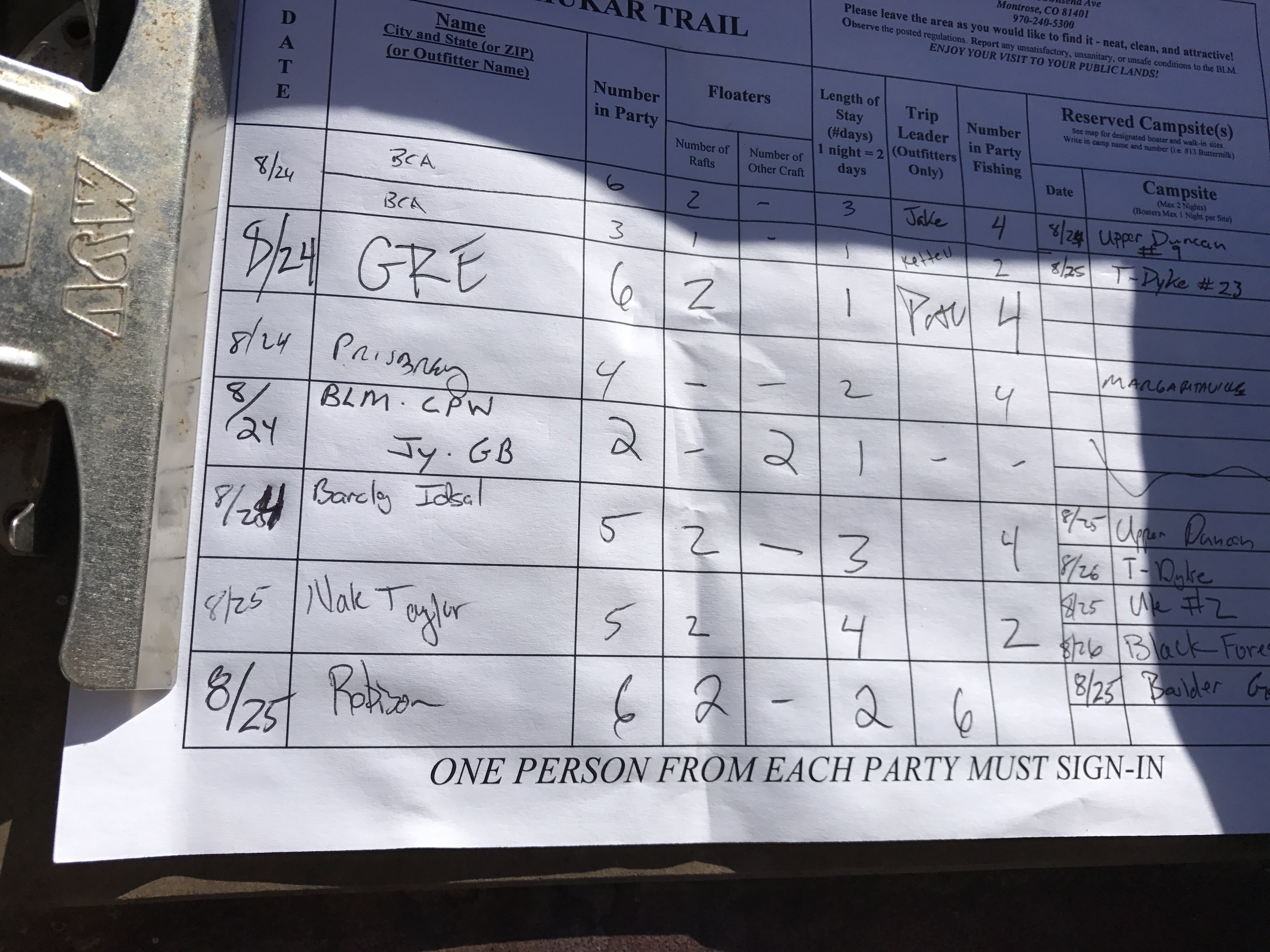 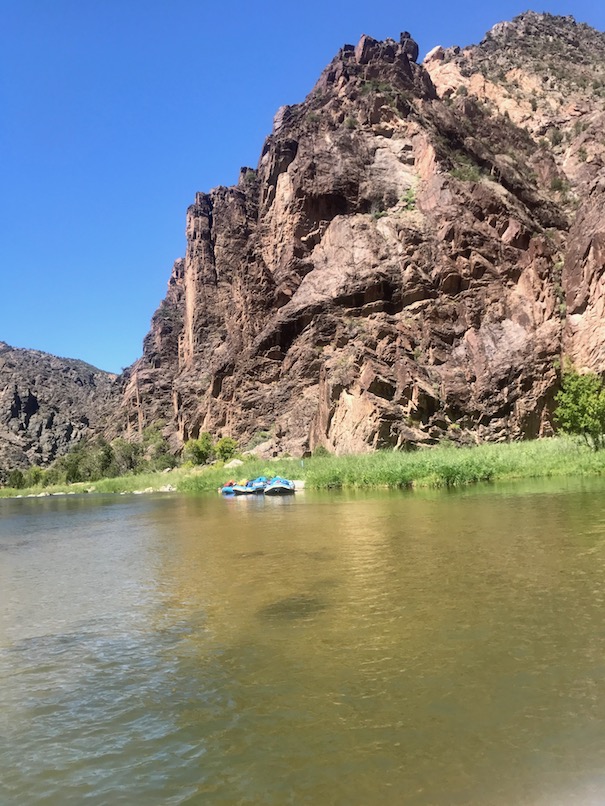 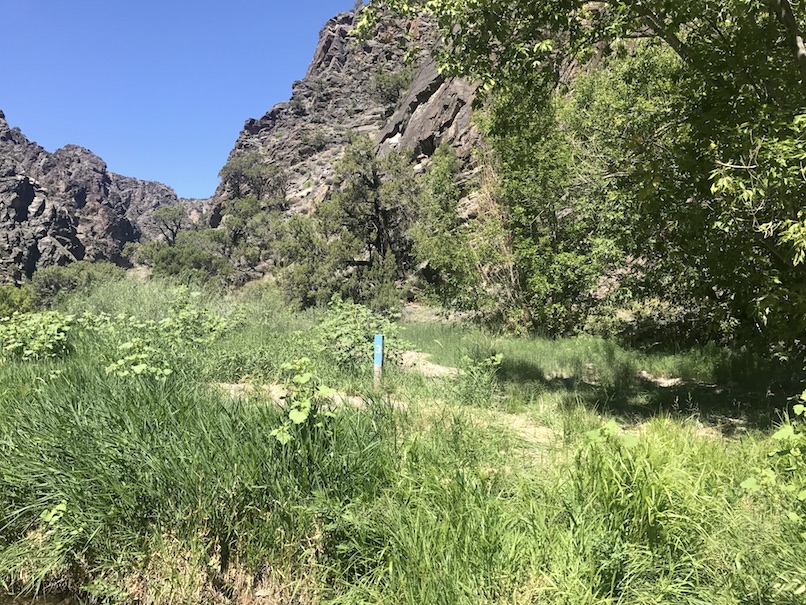 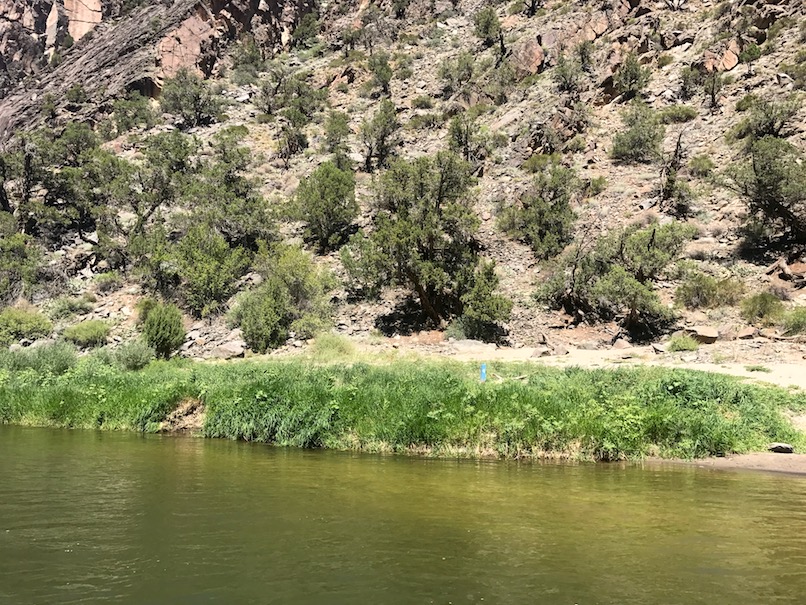 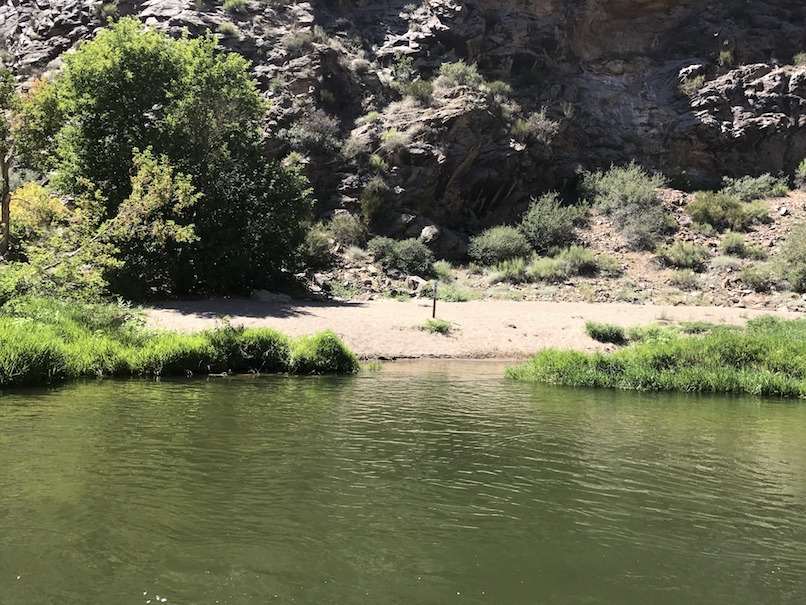 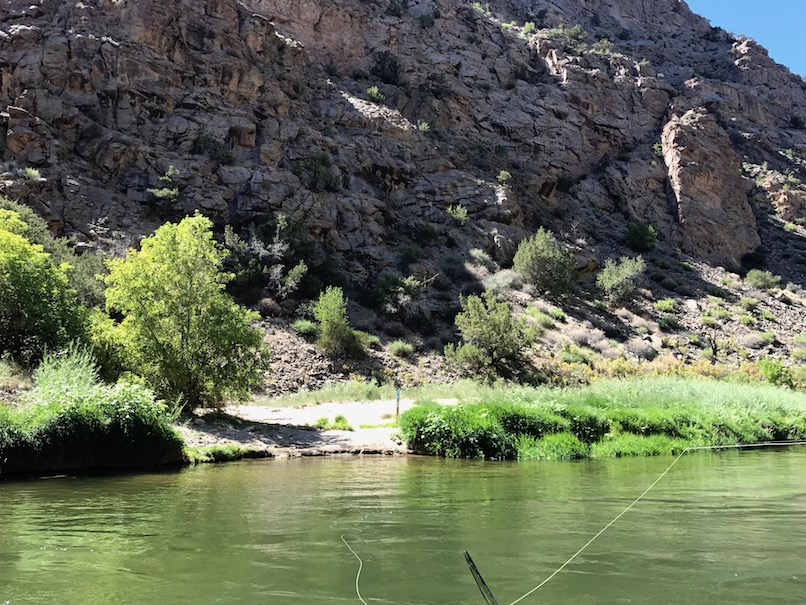 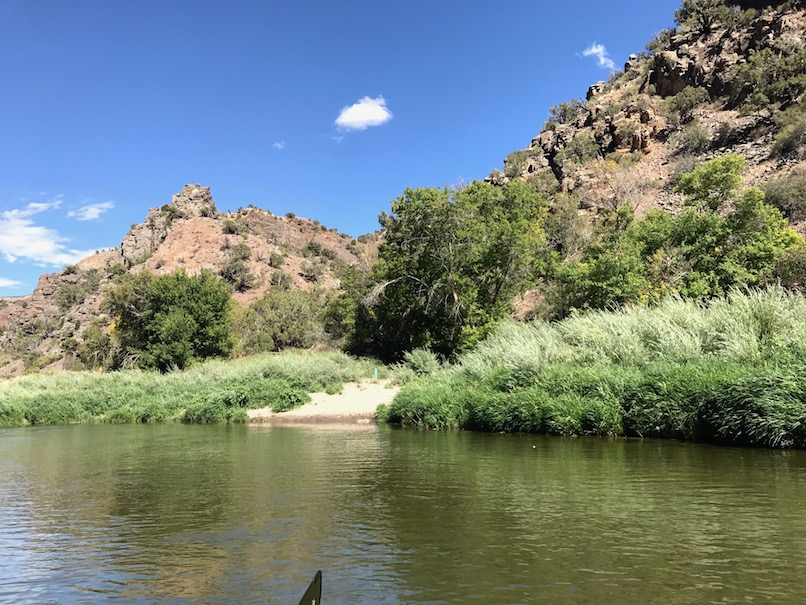 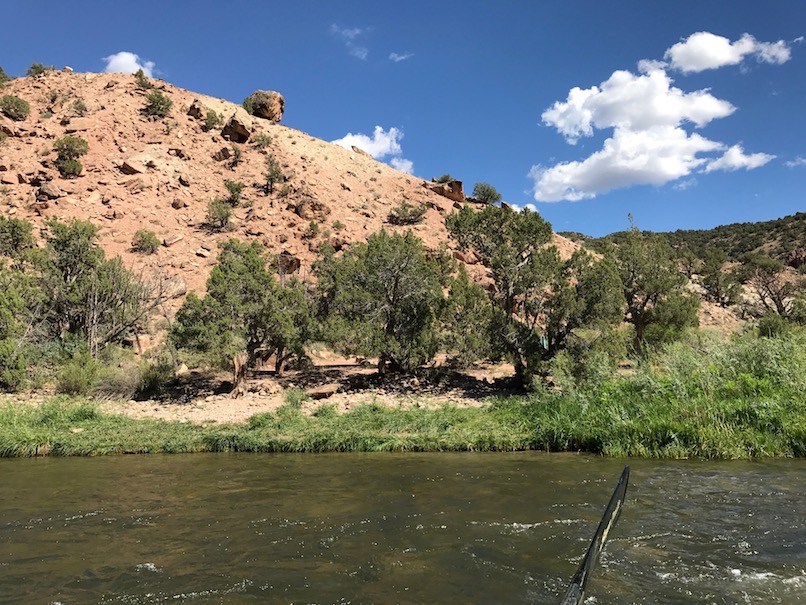 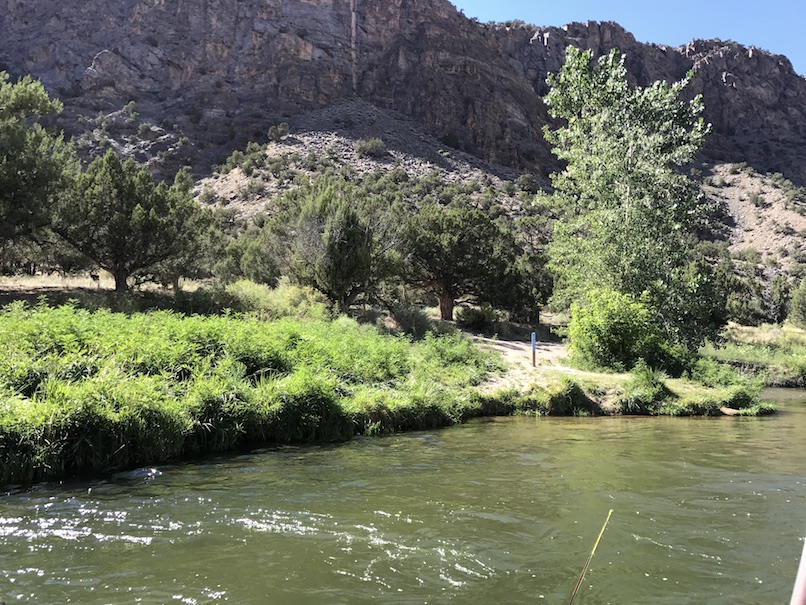 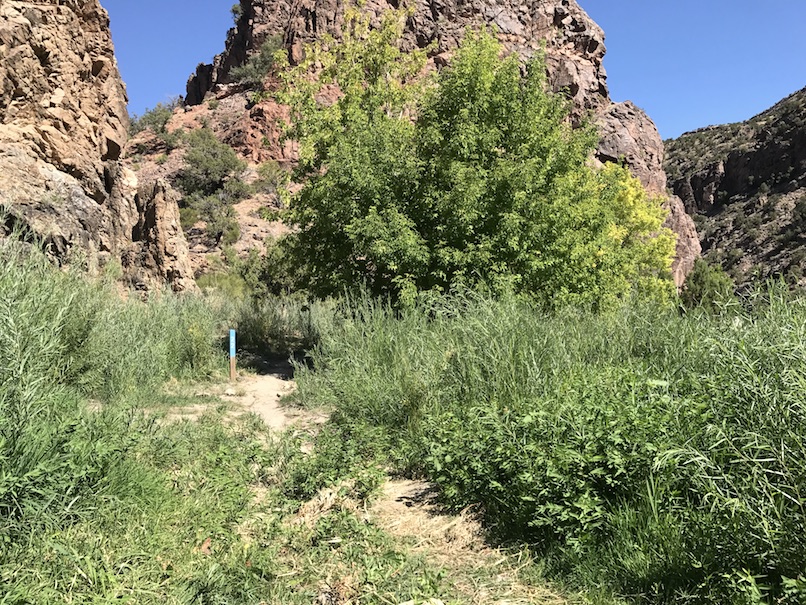 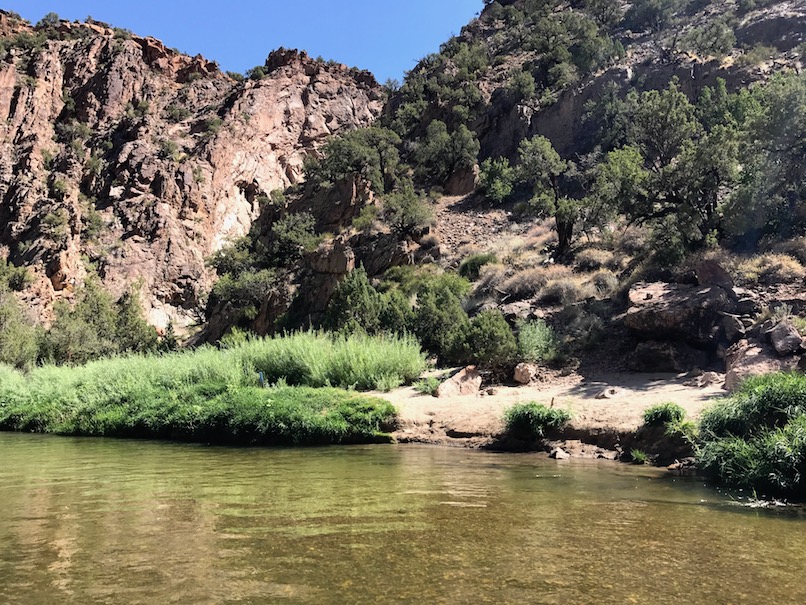 Most of the campsites are really set up for tent camping, there are only a few that are good for hammock camping. There are a fair amount of creepy crawlers down there so for me hammock camping is preferred.
Below Middle Camp there are a few places on river left where you can pull over and relax for awhile in the afternoon. This is a good area for lunch etc. as the canyon will provide shade for the left side of the river in this portion of the float.

You can expect to normally have above average fishing. While there are large fish in there (I’ve seen but not caught…yet) there are a plethora of average sized 14-16″ fish. Large attractors or hoppers seem to be the ticket through the summer after runoff. There are some thick hatches of tricos as well so don’t forget to bring a few small bugs as well. Fishing with a dropper can sometimes be a hindrance as many of the fish are laying incredibly close to shore, picking off terrestrials as they fall in. Don’t hesitate to throw single dry and watch some awesome takes.

One final note is to not assume you can only take out at Pleasure Park. there are several take outs below that point that allow you to fish the lower Gunnison. There are lots of fish in that section and the fishing is just as good so if you’re considering doing your second night lower in the canyon or just outside of it you can extend your day to a lower takeout.